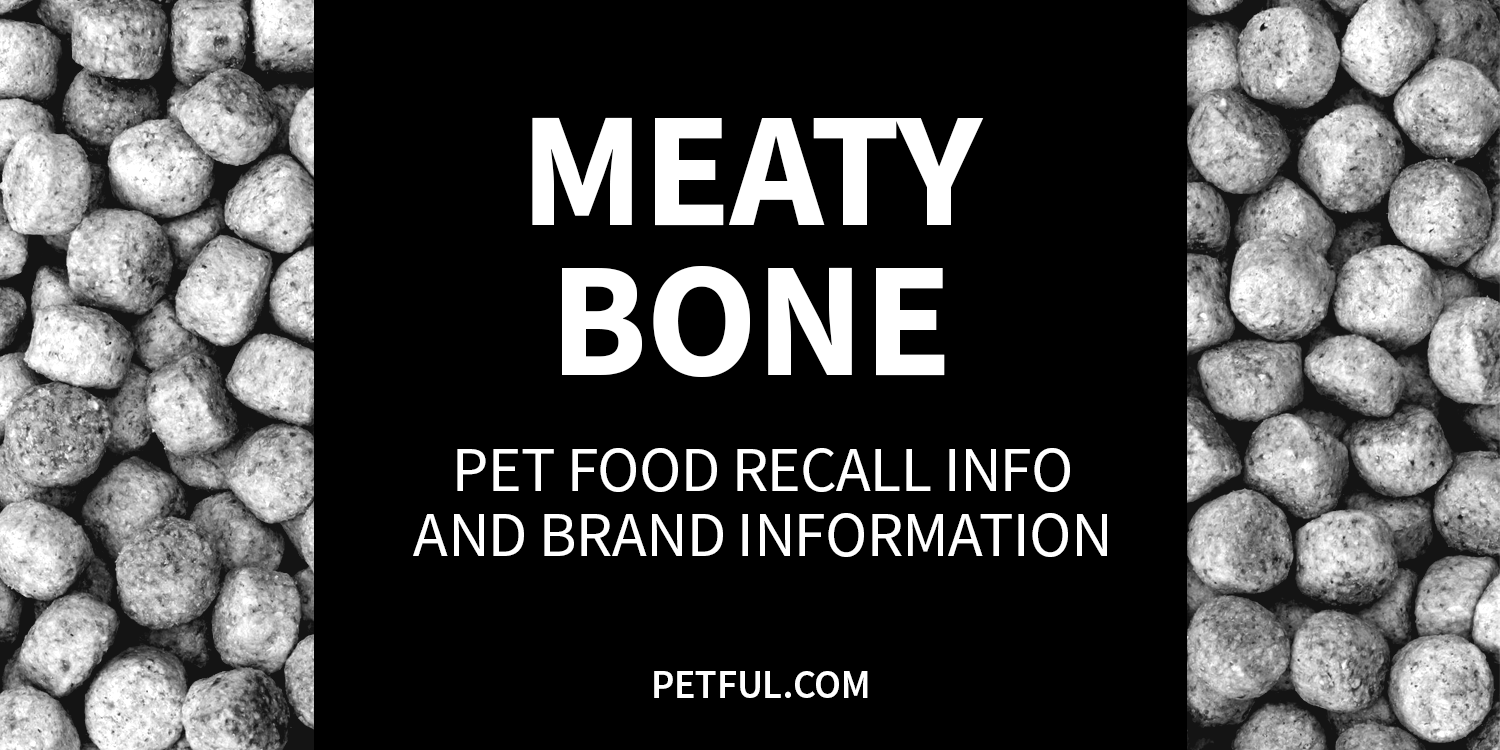 ♥ No recalls. This brand may be discontinued.

The Meaty Bone brand line included 2 types of dog treats — and as of mid-2020, we believe this brand has now been discontinued.

The brand was owned a few years ago by Del Monte, which became Big Heart Pet Brands. Then, in 2015, J.M. Smucker Co. acquired all Big Heart properties in a huge, $5.8 billion deal.

We have much more information about Meaty Bone’s long history below, including up-to-date recall information. 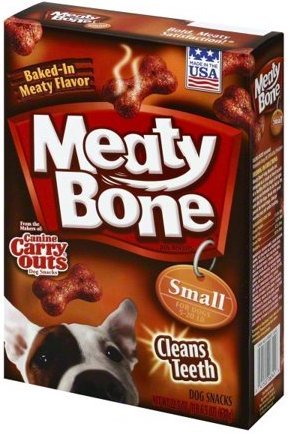 A 1980 advertisement introducing the product declared it “the first dog biscuit made with real meat.”

The ad further described Meaty Bone this way: “Outside, a delicious coating made with real meat. Inside, a crunchy hard biscuit to help keep teeth clean and strong.” (Perhaps they were made of real meat, but Meaty Bone ingredients included animal fat, meat byproducts and animal plasma.)

In 1995, Meaty Bone treats were reformulated “with more beef.”

And in 1996, Heinz introduced 6-pound zippered bags of Meaty Bones, said to be “an attractive and convenient solution to overzealous dogs and overburdened consumers.” The zippered bag “protects the product from puppy pilferage,” according to the company.

For many years, Meaty Bone was a head-to-head competitor to Milk-Bone. And at least on one occasion, this long-simmering, dog-eat-dog rivalry threatened to end up in court.

In 1990, Milk-Bone told reporters a lawsuit was being considered to stop Meaty Bone’s “invalid” claims that its treats were preferred “2-to-1” by dogs because of Meaty Bone’s meaty covering, which Milk-Bone didn’t have.

Meaty Bone was the No. 2 dog biscuit as of 1990, with about 13% of the biscuit segment of the dog snacks market, according to Advertising Age. Milk-Bone was the market leader, with a dwindling 40% share, and Purina Biscuits was No. 3 with an 11% share.

In 2005, Del Monte claimed its Meaty Bone biscuits were 40% more effective at reducing tartar than Milk-Bone biscuits. “By including Meaty Bone dog biscuits twice a day as part of their dog’s daily oral health regimen, owners can look forward to rewarding their dogs with good health, better breath and great taste,” said Matthew Park, vice president of marketing, Del Monte Pet Products Division, according to a press release from June 2005.

Innovation — And the End of a Rivalry

In October 2005, Del Monte introduced a new Meaty Bone Denta-Delicious dog chew, a bone-shaped treat with a tasty meaty flavor that was said to be scientifically proven to reduce tartar buildup by 70%.

In spring 2006, Del Monte announced a “major step forward” for the company — and the effective end of a long-running pet-brand rivalry. Milk-Bone was being acquired from Kraft Foods Inc. for $580 million, which meant Del Monte would now own both Milk-Bone and Meaty Bone.

“Milk-Bone is an iconic brand with a 100-year heritage, [and] it is also one of the most trusted and well-recognized brand equities in the entire pet products category,” said Rick Wolford, chairman and CEO of Del Monte Foods.

Wolford added that “Milk-Bone’s focus on oral care will be a great addition to Meaty Bone’s great taste at great value consumer offering.”

And now? As of late April 2020, the Meaty Bone website simply redirects to Canine Carry Outs, which has been a much bigger seller for the parent company in recent years. We also noticed that Meaty Bone has been listed as “out of stock” on many popular pet retail websites. In addition, the Chew-Lotta treats now carry the Canine Carry Outs name rather than Meaty Bone.

Was Meaty Bone Ever Recalled?

No. This brand was never recalled in its long history, according to our research of recall databases and news archives going back 40 years. As we mentioned, it now appears that Meaty Bone has been discontinued. We will correct this if our understanding changes.

Did You Have a Problem With Meaty Bone?